Evaporative cooling, altough having its effectiveness more restricted when the air natural humidity goes higher, still has some advantages that makes it figure as a good way to improve thermal comfort in vehicles when a regular air-conditioner is either expensive or hard to set properly. Currently, in Brazil, it's even more popular for some special applications such as cash-transit vans than a conventional air-conditioner, mostly because of the fuel savings it can provide.
Taking this operational scenario for a case study, we might remember the effects of extreme temperatures in the health of the operators: during the summer, the internal temperature of a cash-transit van can easily reach 50°C/122F, and the poor air renewal inside the cabin ends up leading to phisycal and mental fatigue, blood pressure alterations, skin allergies, eyes dryness and respiratory distress. Meanwhile a regular air-conditioner requires the engine on to activate the compressor, evaporative coolers (also referred to as "swamp-coolers") can operate as stand-alone units in electric power only, and some are programmable to pre-set a comfortable working environment for the crew.
The maintenance of an automotive evaporative cooling device is also easier to perform, requiring basically the water fill-ups (more frequent than recharging the refrigerant gas of an A/C, but still an easier and safer procedure), periodic replacement of the humidifier filters (usually at each 3 months) and eventually the replacement of the fan electric motor or its brushes. But since the roof-mounted evaporative coolers are more self-contained, access to the components for the preventive maintenance is quicker, leading to a reduced time to be spent with these procedures, while an A/C requires sealing tests for leaks with an UV reagent for visual contrast, compressor driving belt and electromechanical clutch pack replacements, and in extreme situations may even require the dashboard to be disassembled. 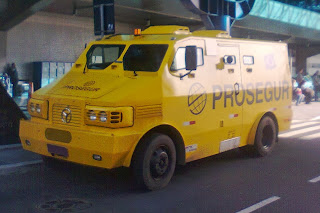 Comparing to a regular air-conditioner, the effect of an evaporative cooling setup over the fuel consumption is more negligible, not just due to its ligther weight increasement but also due to the lower mechanical load, since it doesn't require an engine-driven compressor. Instead of using a synthetic gas, it uses only water as the cooling fluid, which also reflects as an environmental benefit since the most usual refrigerant gas commercially available is HFC-134, also known as R-134a, ranked among the so-called greenhouse gases and with a lifespan longer than carbon dioxide when released in the atmosphere. And meanwhile R-134a requires an energy expense to be manufactured, evaporative coolers can use rainwater.