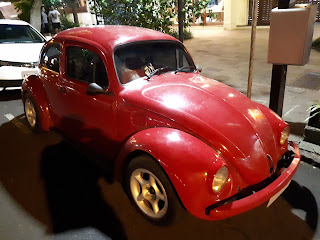 Spotted this red Beetle last Friday night. It's a '76, and it was originally fitted with the 1300 air-cooled boxer engine. However, taking a look behind it, the engine lid had a bump that may suggest it to have been swapped with some water-cooled straight-4 such as Volkswagen's EA827, and so it would need clearance to fit the longer cylinder head which also sits taller. The slots on the lid itself and the ones between it and the rear window were shut, so it's uncertain how the air intake gets on its way to the carburettor. The radiator might have been mounted sideways between the engine and one of the rear wheels, which is not an unusual approach for Beetle-based vehicles converted to some water-cooled engine in Brazil.

However, the feature that has caught my attention more than any other was the rear wiper, which I was aware of some Beetles that had one adapted but never seen one personally before. Didn't really expect it to hang above the rear window instead of below, which is a more usual position for it on vehicles originally fitted with one. Apart from this Beetle, the only vehicle I can recall having the rear wiper hanging from above is the Range Rover Evoque. 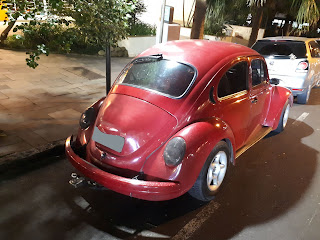