Are biofuels suitable to save Venezuela?

Any talk about fuels in Venezuela moves into controversial matters, such as the heavy subsidies to keep the gasoline and Diesel fuel prices below their real cost, and the state monopoly over the energy resources such as petroleum and natural gas. Even though the crippled Venezuelan economy relies basically on the profits of its petroleum products export, it's plagued by poorly-mantained refineries and other infrastructural problems, and the endemic corruption of South American populist dictatorships. It's also worth noting that about 70% of all the food consumed in Venezuela is imported, not due to any lack of arable land or pastures.

Back in 2009, the then-dictator Hugo Chávez set a CNG mandate, enforcing that at least half of all the new vehicles sold in Venezuela should be able to run on gasoline and compressed natural gas, with a conversion program subsiding the retrofit of an alternative fuel system at the expenses of state-owned oil company PDVSA enabling older vehicles to also run on CNG. As this fuel doesn't require the expensive and energy-consuming process of refining, being also considerably cheaper to transport to the refueling stations through pipelines instead of tanker trucks, it would predictably decrease the expense on gasoline and Diesel subsidies, leaving more of those to be exported for their international market prices or just to be given away as a payment for loans contracted by the Venezuelan dictatorship with China. Devaluation of the local currency and low oil prices in the international market hit the economy in Venezuela pretty hard, and became a threat to food safety, so why not to take a look at a possible integration between the production of food items and renewable fuels in order to diminish the economic disaster and prevent starvation? Maybe because it's easier for the dictator Nicolás Maduro to blame the yankees, Israel, and everybody else instead of moving his cimarrón arse and doing something really useful. Why not to support cattle farmers from Táchira state, homeland of the great Marcos Pérez Jiménez, instead of forcing the people to slaughter donkeys in order to get some meat or so many Venezuelan mothers who are having to rely on smuggling to get milk for their children, for example?

Distillation-dried grains (DDG) and other leftovers from ethanol fuel brewing are suitable to feed livestock, much like the "cake" released from the pressing of seeds for edible oil (which could later be repurposed either directly as fuel or turned into biodiesel) extraction, while a wide variety of residues from agropastoral activities also constitute an economically viable source of raw materials to be turned into biofuels. From fruit and vegetable peels to beef tallow, it's perfectly viable to integrate food and fuel production instead of relying solely on fossil fuels with highly unstable prices to support the expense on food imports which is a suicidal move. Maduro and its predecessor Hugo Chávez actually could blame previous "puntofijist" governments from AD and COPEI for deteriorating the living standards of Venezuelan people, but they had resources to solve the crisis and instead decided to take it one step further with their "Bolivarian" agenda. Instead of subsiding so heavily the petroleum-based fuels, turning the support to agriculture, livestock raising (not just cattle but also poultry and eventually fish-farming) and the industrial processing of the produce to enhance its shelf stability (cutting refrigeration costs significantly) would seem more prudent, and then brewing biofuels from the leftovers deemed unsuitable for human consumption. Or does anybody drink gasoline instead of eating?

It may sound kinda weird, but Venezuela actually imports light oils to blend with its heavy and tar-like extra-heavy crudes in order to refine them adequately. This is certainly another favorable argumentation supporting biofuels. Sure they won't immediately displace traditional petroleum-based fuels from the market, but the first step must be taken before it's too late. Otherwise, Venezuelans are going to either starve to death or keep humiliating themselves at border crossings exchanging a full gasoline tank for a roasted chicken and a bottle of Coca-Cola on a daily basis for a long time.
Postado por cRiPpLe_rOoStEr a.k.a. Kamikaze às 12:00 AM 4 comments: 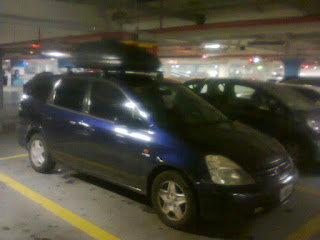 With a very limited worldwide availability, mostly to Europe and the Asia-Pacific region, it was kinda surprising for me to see a Honda Stream of the first generation from 2000 to 2006, still derived from the Honda Civic, with Argentinian registration plates. With its sporty appearance, it's actually far from the boring looks of a stereotypical soccer-mom van. Also, being more aerodynamic than a closely-sized Honda CR-V, it was a good alternative for those who either disliked the pretentious off-road look or didn't need the slightly higher ground clearance of the C-RV. 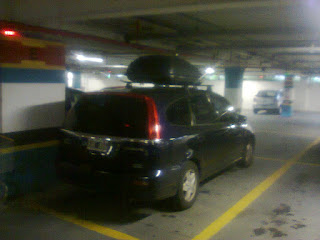