Brazilian vs. Chinese: what's the best approach to the small bakkie?

Small bakkies are a popular option for those who are looking out for a commercial vehicle with a lower total cost of ownership in countries such as Brazil, where traditional automakers with a strong foothold such as Fiat (now a Stellantis division) have a consolidated presence in this segment. Even though there has been a competition from Chinese automakers since 2007, when copies of the Suzuki Carry made by Changan were the first official imports of vehicles made in China to Brazil, the conservative profile of most Brazilian car buyers meant these ended up having a smaller appeal and strictly among commercial operators who were more concerned about the lower purchase price than anything else. The availability of replacement parts is often neglected by importers of those Chinese bakkies for instance, leading their owners into resorting to adaptations with components of some more mainstream model, yet a live-axle rear-wheel drive layout and body-on-frame design already lends itself better to some makeshift fixes.

In favour of the car-based designs more sought after in Brazil, which despite being mostly based upon a front-wheel drive unibody such as the Fiat Strada end up resembling an Australian coupé-utility, there is usually a better overall performance due to the fitment of engines better suited to deal with the GVWR, in contrast to the often underpowered copies of some random outdated Japanese engine and extremely low gearing often found on those Chinese copies of the Suzuki Carry. While the unibody doesn't render a Brazilian coupé-utility so easy to replace the stock rear tray for a task-specific bodywork compared to a body-on-frame, and the front-wheel drive is more affected by changes to the weight bias when loaded, the Fiat Strada often leads the commercial vehicle sales ranking in Brazil, not only among urban buyers who might prefer a smoothier ride but also for agribusiness-related duties. In the end, while commercial operators may become attracted to the cheap Chinese Suzuki copy at a first glance, the Brazilian coupé-utility is more cost-effective. 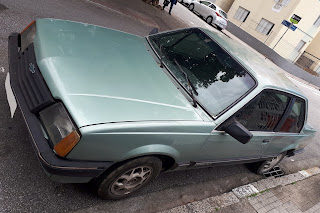 Just like the American Chevrolet Cavalier, the Brazilian Chevrolet Monza was a regional variant of the J-body platform, even though its styling and much of its technical features bore a greater resemblance to the Opel Ascona C, most noticeably the belt-driven SOHC Opel-designed Family II engine available from 1.6L up to 2.0L according to the model-year. As the Brazilian market in the '80s favored ethanol as a motor fuel, naturally the Monza also featured engines capable to operate on it, even though they were not flexfuel, still resorting to a carburettor due to local content regulations which prevented electronic fuel injection from becoming mainstream. Even though it's quite uncertain if this '90 Chevrolet Monza SL/E with the 2.0L engine still runs on ethanol as the ÁLCOOL badge implies, since it became usual to convert older dedicated-ethanol cars to gasoline after the ethanol crisis between '89 and '90 when even methanol from the United States had been imported as a somewhat desperate attempt to keep much of the Brazilian fleet running, seeing a car of that period still featuring a sign that it had been originally ethanol-powered before the flexfuel systems became mainstream is quite interesting. 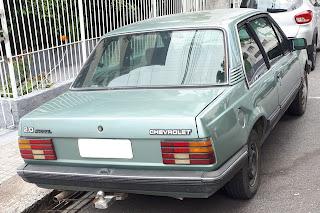 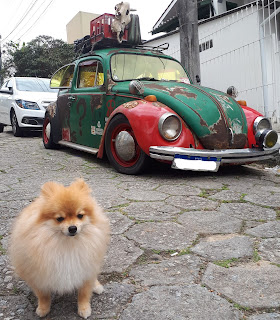 Even though the air-cooled flat-4 engine is highlighted as one of the most noticeable features of the VW Beetle, the recent development of a 3-cylinder airworthy radial engine by Bespoke Engineering catering to the light sports aviation market in Australia had also been noticeable for its perfect fit into Beetles or other Volkswagens with the Type 1 engine (which has the cooling fan mounted at a higher position than the one of a Type 3 "pancake" engine) and even into some Porsches. Available on either air-cooled or liquid-cooled versions, from 2.0L to 2.1L and the option for carburettors or electronic fuel injection, the Radial Motion engine can cover both classic cars and modern vehicles keeping up-to-date with current emission regulations in Australia and some other countries with similar emission standards for motor vehicles. Even though a radial engine may be as much of a challenge to fit into vehicles with transverse engine layout, leading it better suited to the ones with a longitudinal engine, at least 5 vehicles other than air-cooled Volkswagens or Porsches could be mentioned as temptint to try a Radial Motion engine swap had cost not been an issue, as these engines are far from dirt-cheap... 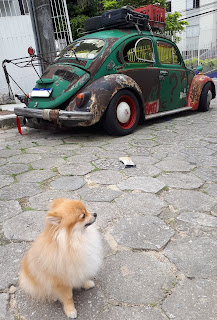 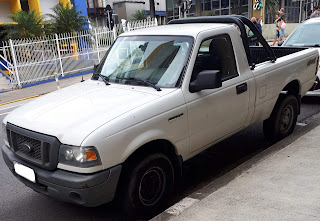 1 - Ford Ranger (Americas model until 2011): as some trims of the Radial Motion engine outperform the 2.3L Duratec 4-cyl which was the base-engine for this model, even though it has a slightly smaller displacement and a pushrod valvetrain, it already sounds interesting enough to justify. The lower weight is also interesting, considering the gasoline-powered versions had a lower payload than the turbodiesel versions made in Argentina, so the weight bias would be improved while unloaded without detrimental effects while loaded; 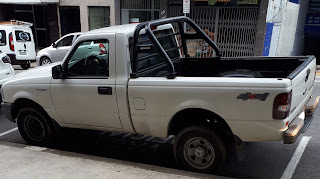 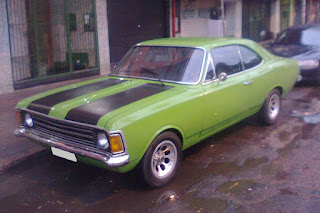 2 - Chevrolet Opala: the Brazilian equivalent to the Opel Rekord C/Commodore A, was fitted with the 2.5L Chevrolet 153 engine (later 151) on its 4-cylinder versions, while the 6-cylinder had either a 3.8L 230 or a 4.1L 250 engine according to the model-year. Even though it's smaller than any engine fitted to the Opala and the 6-cylinder Opel CIH engines fitted to the Commodore, there are some versions of the Radial Motion capable of outperforming them all in stock form. Liquid-cooling might sound as a quite obvious way to go, but I must confess it would also be quite tempting to try an air-cooled; 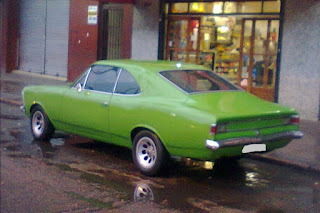 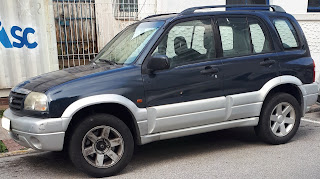 3 - early Suzuki Grand Vitara: even the 2.5L H25A V6 can be outperformed by some versions of the Radial Motion engine, let alone the much more usual 4-cylinder 2.0L J20. A lower-weight and shorter engine such as the Radial Motion may also actually benefit off-road performance; 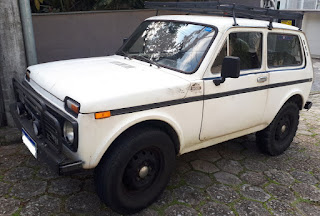 4 - Lada Niva: engine swaps are quite common for this model in my country, with Volkswagen EA827 engines being the most common option. As the Radial Motion is offered with a Volkswagen bolt pattern it might be another straightforward adaptation too; 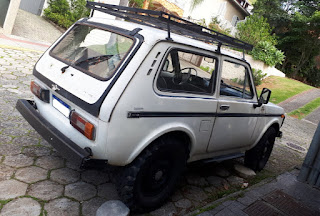 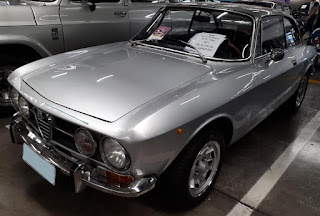 5 - Alfa Romeo Giulia GTV: an Italian beauty which stock engine is a piece of mechanical artwork, but it would still be tempting to go one step further. Well, considering the carburettor-fed versions of the Radial Motion might at first seem more complicated due to having one more carburettor, it's also worth to remind it won't require any timing chain replacement as the Alfa Romeo "Nord" Twin Cam engine would, the Alfa Romeo had dual-barrel carburettors which are far from dumbproof. It's also interesting to compare the electronic fuel injections of the Radial Motion to the SPICA mechanical fuel injection which used to be fitted to US-spec Alfa Romeo models. 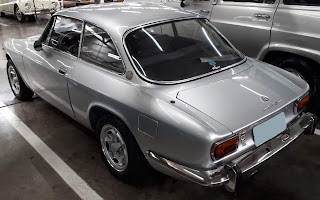 Postado por cRiPpLe_rOoStEr a.k.a. Kamikaze às 3:15 AM No comments: 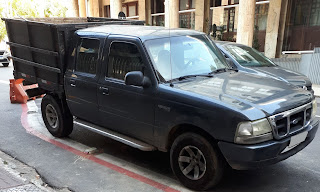 Flatbeds are a quite usual fitment to work trucks in Brazil, and it's still a common practice using wood to manufacture these bodies. Most often a regular-cab would be seen with it, but once in a while a crew-cab also shows up featuring a wooden flatbed. It's the case of this 2002 model-year Ford Ranger, made in Argentina and fitted with a regionally-sourced International 2.8L PowerStroke 4-cylinder turbodiesel engine.

Postado por cRiPpLe_rOoStEr a.k.a. Kamikaze às 3:01 AM No comments:

Why could the Ford Ka Mk.1 be considered suitable to the role of a VW Beetle replacement? 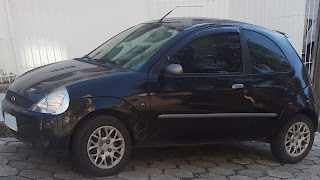 Meant to be basically a compact runabout more suitable to the city traffic, while retaining performance levels which enabled driving on the road too, the first generation of the Ford Ka is probably not among those models which could eventually qualify as some sort of contender for the role of a replacement to the Volkswagen Beetle. Certified as a 4-seater on the markets where it had been avaliable, in contrast to the Beetle which is mostly recognized as a 5-seater despite being slightly narrower, the early Ford Ka is not meant to address the same riding conditions of the '30s in rural Europe, yet it's often praised for its handling which tends to be compared to that of a go-kart on a more spirited driving. Conveniently sized for urban commuting, yet with a less-than-modest luggage capacity while all the 4 seats are in use, there are a few similarities to the proportions of its design which lead the Ford Ka Mk.1 to effectively remind a few styling cues of the Volkswagen Beetle to a minor extent. 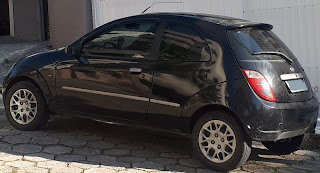 Naturally some technical differences such as relying on a front-mounted transverse inline-4 engine and front-wheel drive, which became the standard for most economy-cars in the '90s along the McPherson suspension up front and a rear torsion beam, highlight much of the changes within the motor industry and the focus on "manufacturability" increasing the parts commonality with other mainstream models for better economics of scale. Unlike the Beetle which turned out to be quite unconventional according to the standards of small cars at its release, and became a category of its own, the Ka followed a quite conservative approach considering the market conditions during its development and production cycles. So, despite the obvious technical aspects and marketing circumstances which each model was subjected at their respective times, it's not totally out of question to consider the Ford Ka Mk.1 one of the possible answers to the search for an eventual Beetle replacement. 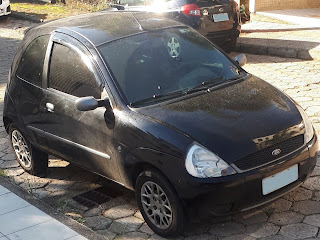 Postado por cRiPpLe_rOoStEr a.k.a. Kamikaze às 2:32 AM No comments: