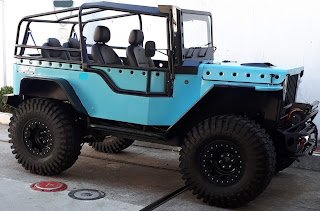 Looking interesting to say the least, this custom-built model is clearly oversized in comparison to stock Jeep "flatfender" models, from which it takes styling cues. Built around what seems to be the frame of a first-generation Toyota Fortuner, known in Brazil as Hilux SW4 or more recently just SW4, features the 3.0L 1KD-FTV turbodiesel engine, with full-time 4-wheel drive and automatic transmission. Fitted with an independent front suspension and a solid rear axle with a Panhard rod, being coil-sprung all around is likely to provide a much smoother ride than the old-school rides with leaf-springs and solid axles on both ends. 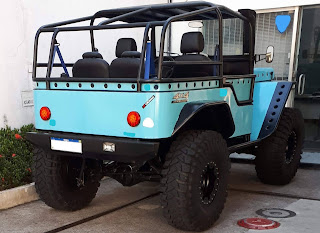 Postado por cRiPpLe_rOoStEr a.k.a. Kamikaze às 11:47 AM No comments: 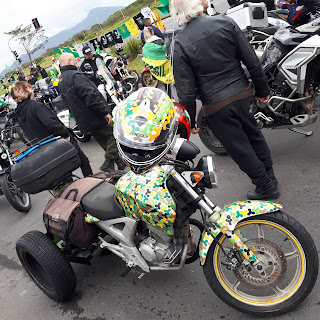 The lower running cost of a motorcycle is attractive to many people, even some who may not actually be phisically able to ride one without some adaptations, such as the tricycle conversion fitted to this Brazilian Honda CBX 250 Twister also known in some export markets as CBF 250. The attachment of a rear subframe, replacing the stock swingarm, doesn't seem to be so much sophisticated, which means it's quite cost-effective, despite the conversion from a rod-operated rear drum brake for a hydraulic disc acting on both rear wheels. Even though it became slightly wider than the original motorcycle, the rear track remained narrow enough for the lack of a differential not be so detrimental to the handling. 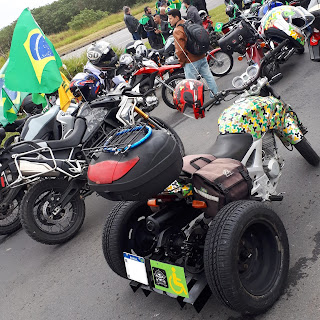 Postado por cRiPpLe_rOoStEr a.k.a. Kamikaze às 2:02 AM No comments: