Could the Brazilian Chevrolet Corsa Pick-Up/Opel Corsa Utility have been compliant with American regulations?

It's no surprise the Opel Corsa B had a considerable popularity, including its Chevrolet derivatives from Brazil and Mexico which were available in most of Latin America and even in Africa and Middle East, but none of its versions had ever been available in the United States and Canada. When it comes to regulations, which may be quite stricter and expensive to get the EPA, DOT and NHTSA certifications, all those Suzuki and Daewoo rebadges have shown it would not be so pointless to consider the Corsa. When it comes to engines, at least the 1.6L one which used to be the only option in Brazil and Mexico had some versions of the same Family 1 engine range EPA-certified for other models during its entire production run. Not even the preference for automatic transmissions in the United States or the Chicken Tax should've prevented it to catch some attention from American customers, as some versions of the Corsa with other bodystyles had automatic transmission available as optional equipment and Mexican assembly could enable it to circumvent the Chicken Tax through the NAFTA. And also considering the GM4200 platform served as the underpinnings for models meant to developed markets such as Europe, Japan and Australia, even though their safety regulations are not the same as the ones enforced by the NHTSA, the 2-seating configuration could've made it easier to certify the Corsa Pick-Up in the United States than the hatchback or even the sedan bodystyles.

Postado por cRiPpLe_rOoStEr a.k.a. Kamikaze às 2:36 AM No comments:

How did Fiat get it so right with the Argo? 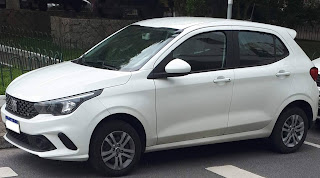 It may seem quite pointless in Europe, but the Fiat Argo was launched in 2017 as the replacement for both the Punto and Palio in Latin America while also attempting to fill the gap left by the absence of the current generation of the Fiat Tipo in countries such as Brazil where it's made. Besides the "emerging" approach similar to how the Fiat Palio used to be positioned in markets outside Western Europe, a need to compete both in the Brazilian "popular" segment and remain somewhat attractive for customers who would be more inclined toward the next size class for which Fiat was left without a contender in Brazil after the Bravo got phased out demanded its design to not appear of a much lower cost than the larger European Tipo. Engine selection also had to include a 1.0L option for Brazil, with the 3-cylinder variant of the Global Small Engine (GSE a.k.a. FireFly) which shares the basic design features with the 4-cyl 1.3L offered as the base engine in regional export markets such as Argentina and Chile, with the top of the range featuring the E.torQ in a 1.8L variant. Fiat is often pointed out in Brazil as more "specialized" in small economy cars since it started local production in '76, not being so much of a strong contender in more prestigious segments, then it's quite understandable why it decided to concentrate efforts on this stopgap model catering to regional needs. Even though the one-size-fits-all approach may not usually be so effective when it comes to the automotive market, Fiat got it right with the Argo because it doesn't look impoverished for an entry-level model (disconsidering smaller offerings in the Brazilian Fiat range which are too compromised regarding design and interior space), while an "emerging" approach doesn't effectively prevent it from being suitable to some customers with a more conservative profile within the segment immediately above who considered a downsizing in order to adjust their budgets in the middle of some disastrous economic policies which were implemented not only in Brazil but in neighboring countries too. 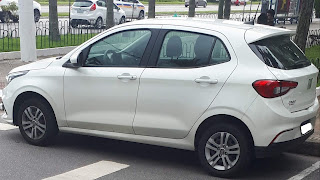 Postado por cRiPpLe_rOoStEr a.k.a. Kamikaze às 3:50 AM No comments: 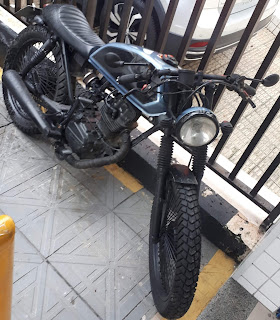 One of those no-frills utilitarian motorcycles which used to be quite widespread in developing countries such as Brazil, the second generation of the Honda CG 125 is getting more appreciation than it used to get until a few years ago when only the earlier model effectively started to become more sought after by collectors. While it may not seem to attract so many enthusiasts for its plain utilitarian design, resorting to the very same rugged engine makes it an interesting option for a custom job without any compromise to its functionality. And honestly, the café-racer style fits it right. 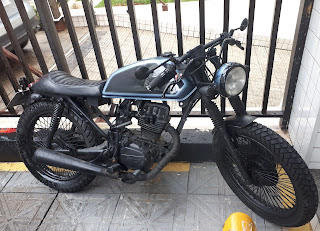 Postado por cRiPpLe_rOoStEr a.k.a. Kamikaze às 3:00 AM No comments: