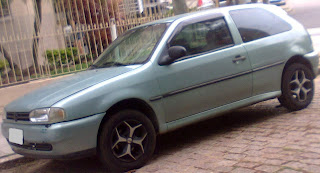 Looking back at some photographs I took in 2014 in my hometown Porto Alegre, this 2nd-generation Volkswagen Gol reminded me the long-gone days when it was quite common to see aftermarket tail lenses to match the color of some cars. Odd enough, nearly all the cars with color-matching tail lights I used to see back in the day were exactly Volkswagen Gol, as it used to be a best-seller in Brazil. The 2nd generation was released in '94, and its early design soldiered on until 2004, even though the first major facelift had been released in '99 and unproperly highlighted as if that was an all-new generation, with a milder (barely noticeable) facelift around 2002 and the last major facelift from 2005 to 2013. But only the pre-facelift ones used to be quite easily seen with those color-matching tail lights, which by the way relied on red-dyed lamps for brake and lantern, amber-dyed lamps for turn signals, and clear lamps for reverse, remaining compliant to the standards for rear lights applied in Brazil. 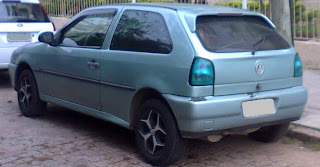 Postado por cRiPpLe_rOoStEr a.k.a. Kamikaze às 2:26 AM No comments: 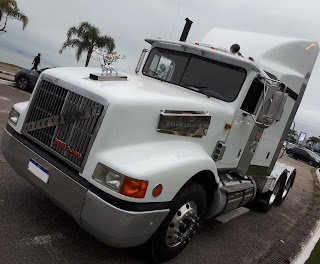 Just like other Latin American countries with an automotive industry which evolved from American and Canadian influences, Mexico had its fair share of rebadges due to brand strategies from the mainstream automakers and local joint-ventures. Diesel Nacional S.A., which is still among the biggest bus makers in Mexico, also manufactured trucks until 2001, and most of its truck range was based on International models corresponding to some American counterpart. That's the case of this Dina D-9400 Eagle, which is exactly the same as the International 9400, featuring even a Cummins N14 engine also license-made by Dina in Mexico. 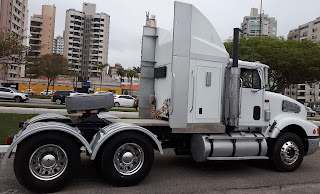 Postado por cRiPpLe_rOoStEr a.k.a. Kamikaze às 12:44 AM No comments:

It's undeniable the Volkswagen Type 1 Sedan had a significant role to define a "people's car" in so many countries where even the Ford Model T retained some sort of a "luxury" image, such as Brazil where the rear-engined rear-wheel drive configuration with all-around independent suspension rendered the Volkswagen a popular option among rural customers until mid-'80s. Locally refered in Brazil as Fusca, often portrayed in the '50s as somewhat revolutionary compared to the American full-size sedans which used to be the standard throughout Latin America, the cult status it achieved on a worldwide basis also reflects among Brazilian enthusiasts who may often not even really care about its utilitarian origins, to the extent of being ultimately more excited about the nostalgia aspect. Even the HoodRide/RatVolks derelict-looking style, mostly associated to the so-called "Cal-look" and often resorting to accessories which were not so usual in Brazil such as "Safari" windscreens and rear luggage racks, makes it easier to justify saving some otherwise underappreciated survivor Beetles from a scrapyard.

Another small car which had a noticeable role at the time of its release both in Brazil and Mexico, and a fierce competitor to the Beetle by the way, the Opel Corsa B was rebadged in Brazil as Chevrolet Corsa and in Mexico initially as Chevrolet Chevy. Even though its technique was quite austere in accordance to the European perspective in '93 when it arrived in Mexico initially imported from Spain and in '94 at the beginning of local production in Brazil, this model is noticeable for undeniably turning the "people's car" segment all-around, as the first real contender to the Mexican Beetle locally called "Vocho", and in Brazil its relevance as a world-class small car going as far as pioneering the electronic fuel injection for entry-level models. Eventually the Opel Corsa B may not reach a similar cult status as the Beetle, yet it had a comparable role in a time when the "people's car" concept in Brazil had already been highlighting the preferences of a more city-oriented customer base.

Postado por cRiPpLe_rOoStEr a.k.a. Kamikaze às 12:31 AM No comments: