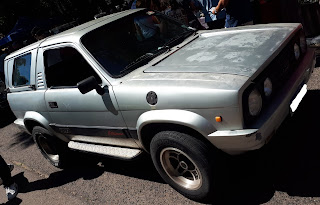 Brazil is well known for the long-time prevalence of Volkswagen in the local market, and when imports were severely restricted from the mid-'70s until the reopening in the '90s, makeshift models catering to customers looking for something to stand out in the crowd relied on Brazilian-made mainstream cars as a source for engines and other components. That was the case of the Ragge California, a mini SUV with the Volkswagen powertrain and a fiberglass body, originally released in '86 branded simply as Ragge and renamed in '87, soldiering on until '89. There was another derivative named Long Beach, released in '90 when it was less competitive due to the reopening of imports, and slightly longer as it retained the standard wheelbase of the Volkswagen backbone frame, instead of relying on a shortened frame. There were exports at least to the United States in form of kit-cars, as well as to Japan and Italy. 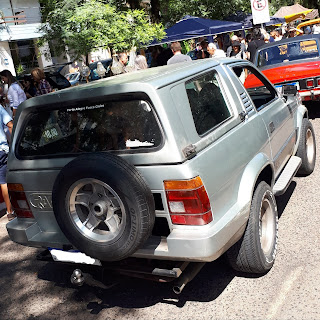 Postado por cRiPpLe_rOoStEr a.k.a. Kamikaze às 4:07 AM No comments:

Besson & Gobbi, the manufacturer of the Volkswagen-basaed Miura sports car, ventured in the '90s in the "dual-cab" conversions for trucks, having released models based on the Chevrolet C-Series, which by the was had been one generation behind the evolution of its American counterparts since the '70s. A configuration which used to have its fair share of popularity in Brazil gave a sedan-like appearance to trucks, most often resorting to fiberglass instead of steel for the bodywork. Besson & Gobbi had some expertise with this material, which had been used for the body of the Miura range prior to the BG Truck series which was its last attempt to compete with imported dual-cab trucks and SUVs which took over the Brazilian market after the imports were reopened in the early '90s. This one that I spotted in Porto Alegre, my hometown and also where Besson & Gobbi was headquartered, is a '94 model-year the last year before Chevrolet full-size truck production moved from Brazil to Argentina.