Once a popular powerplant for European vehicles, also widely used for other applications such as marine and stationary/industrial, the Perkins 4-108 was a development of the 4-99 engine originally released in '58. Discontinued only in '92, it could eventually be perceived as somewhat archaic by then due to the 3-main-bearing crankshaft and overhead valve layout with a gear-driven camshaft in the block, even though it could still fare reasonably compared to modern overhead-camshaft rivals with a 5-bearing crankshaft which started to appear in the '70s. At least 5 vehicles which were highly successful in the '90s and fitted with some OHC engine for their Diesel versions would actually be not bad with the seemingly-outdated Perkins. 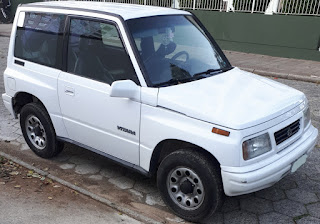 1 - Suzuki Vitara: even though it was launched in the late-'80s, the 1st-generation Suzuki Vitara was highly successful through its production run which spanned until '98. Diesel engines from Peugeot and Mazda were available on selected markets, including Spain where it used to be locally assembled by Santana Motor in order to circumvent import quotas on Japanese-made vehicles. Considering the Perkins 4-108 used to be also made in Spain by Motor Ibérica under license, it seems quite surprising this engine which was already well-proven didn't get a chance to have its value highlighted in what was then a modern compact SUV; 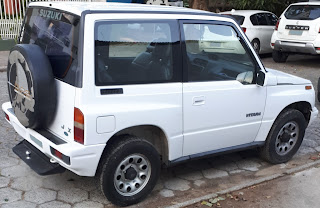 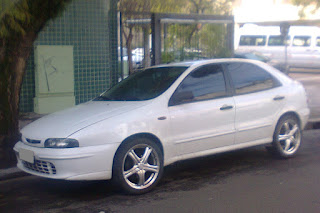 2 - Fiat Brava: one of those models which served as a billboard to highlight the transition from the indirect injection and natural aspiration on light-duty Diesel engines to the turbocharged common-rail layout which is now widespread, such situation might seem to justify views that a Perkins 4-108 would still be suitable. Since the naturally-aspirated engine with indirect injection featured on the Fiat Brava was basically a makeshift based on an older gasoline-powered engine series, unlike the newer turbocharged ones which were developed as part of a modular series providing for both gasoline and Diesel versions since day one, outsourcing from Perkins for the simpler trims wouldn't be so bad at all; 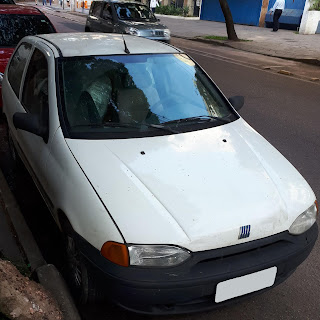 3 - early Fiat Palio: originally released in Brazil and Argentina in '96, the Palio had some Diesel and turbodiesel engine options developed in-house by Fiat. However, since its assembly in Morocco was performed by Somaca and in South Africa it was built by the local branch of Nissan under contract, it could sound as a good excuse for an engine outsourcing; 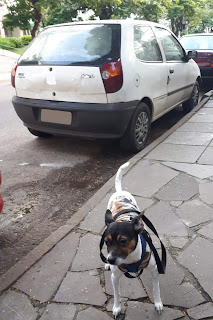 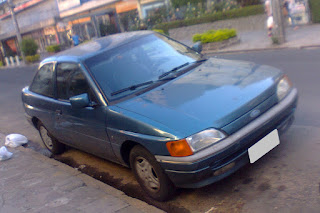 4 - Ford Escort Mk.5: considering the Brazilian versions relied on a 1.6L derivative of the Renault Cléon-Fonte engine and on the 1.8L and 2.0L variants of the Volkswagen EA827 for higher trims, it would not really surprise me if Ford approached Perkins for some improved version of the 4-108 in order to keep it up with the same emission standards its troublesome Endura-D engine had to withstand. The gear-driven camshaft and injector pump of the old Perkins were so much better to deal with than the combination of a duplex chain-driven injector pump and a belt-driven camshaft of the Endura-D; 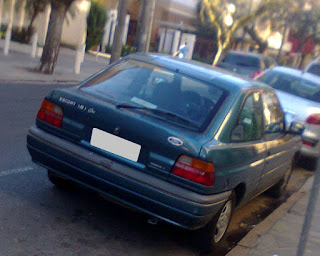 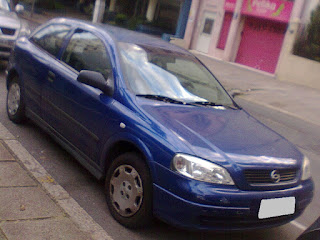 5 - Opel Astra B: even though the Isuzu engines featured on this model were praised as bulletproof, it's undeniable the Perkins 4-108 was suitable to some rough operating conditions which would have made it feel at home on certain regional export markets supplied by the Brazilian production of the model rebadged as Chevrolet Astra. 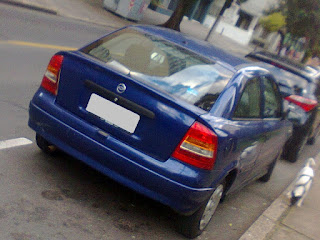 Postado por cRiPpLe_rOoStEr a.k.a. Kamikaze às 3:28 AM No comments: 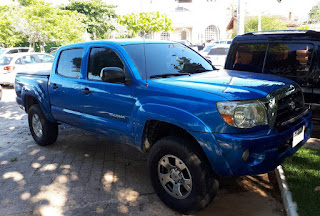 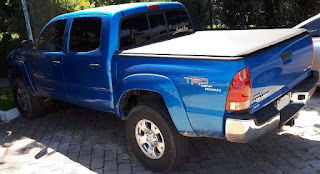 Postado por cRiPpLe_rOoStEr a.k.a. Kamikaze às 2:08 AM No comments: 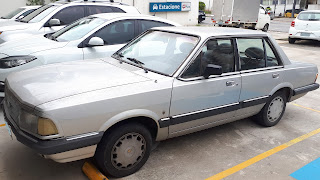 Brazil is not for beginners, and it's been that way for a long time. Among those Brazilian somewhat hard-to-explain features, the car market with its long-time distortions which remain in effect even nowadays has led to the emergence of models such as the Ford Del Rëy, which was an attempt to take the outdated Renault R12 platform which had been license-made by Ford as the Corcel since late-60s and use it as some sort of replacement for the ill-fated Maverick. Even though it was arguable that the Maverick platform would serve better for something more upscale than the Corcel by then, Ford was having a hard time to justify its Brazilian operation and not so keen to make any risky investment, so it seemed easier to concentrate on a higher-volume platform and engine range to eventually increase the chance to such an interim model developed in an economically-challenging period to succeed. Sure the extremely restricted market in Brazil from '76 to '90 favored such a makeshift. Due to another condition unique to the Brazilian market, a 2-door version outsold the 4-door one for a large margin, so a 4-door in a pristine condition is a rare sight nowadays. 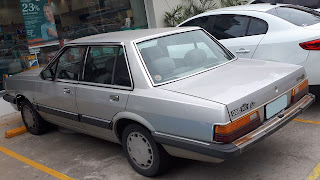 Postado por cRiPpLe_rOoStEr a.k.a. Kamikaze às 12:28 AM No comments: 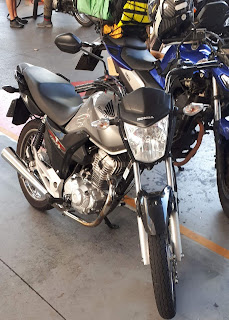 Motorcycles are often used not only for leisure in South America as they are in North America, being also a popular workhorse and daily commuter. For such reason, small-displacement models are quite widespread, with the Honda CG 160 retaining the sales leadership in the Brazilian market with nearly 30% of the total sales volume of new motorcycles in 2019. With so many motorcycles often fulfilling the role of a small car for its owners all year-round regardless of weather and other conditions which may increase the risk of an accident, it's surprising to figure out ABS brakes which are mandated for all the new cars sold in Brazil since 2014 are neglected on motorcycles with a displacement below 300cc for which the so-called "CBS" (combined brake system) applying both brakes simultaneously even if the rider selects either the front brake lever or the rear brake pedal is allowed instead. It might be a matter of concern that so many customers still opt for simpler versions such as the Honda CG 160 Start which has front and rear mechanically-actuated drum brakes, effectively impossible to fit ABS while a single-channel system can be applied on hydraulic brakes such as the front single disc used in the CG 160 Fan for example. 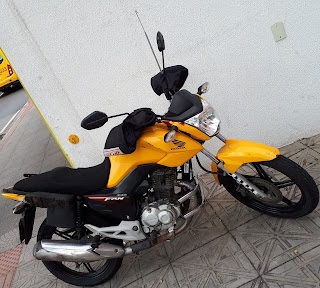 Besides the usages for light cargo and personal transportation, in some cities there is also a moto-taxi service which highlights the overall utility of the motorcycle in a context of urban mobility that might not be neglected. The increased demand for small-displacement motorcycles not only for private uses due to their lower price and running cost compared to a car, either a jalopy or something newer, it's a matter of concern that safety is not being taken so seriously under the false premise of economy while accidents take a toll of deaths and injuries at a higher cost compared to what an eventual mandate of ABS brakes at least on the front wheel of motorcycles below 300cc instead of the mostly uneffective CBS could represent. Considering a similar measure already implemented in Thailand and Indonesia for 125cc motorcyles, where a front disc with ABS became the standard for the small-displacement motorcycles even though the rod-actuated rear drum brake remains due to budget reasons, a similar approach wouldn't make the price of new motorcycles skyrocket in Brazil and other regional markets as it could sound at a first glance, not only due to the simpler hardware compared to the fitment of discs all-around with dual-channel ABS but also due to the economics of scale on models already available with either front drum or front disc according to the trim. 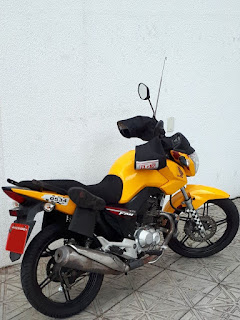 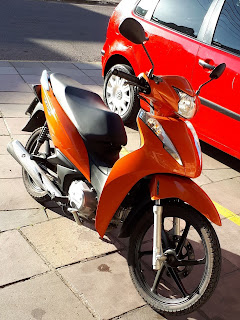 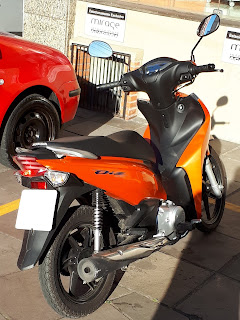 It's worth to notice the Brazilian Honda Biz 125 which is mechanically-related to the overseas Super Cub C125, but despite the more modern appearance it lacks the much-desirable front ABS brake that could be especially beneficial for its public that often includes unexperienced novice riders who look at a small motorcycle mostly due to the urban mobility aspect which is somewhat deficitary in thrird-world countries. Even though the economics of scale could dictate switching from the current 220mm front brake disc similar in size to its foreign counterpart, eventually changing to the 240mm disc with ABS now fitted to the front wheel of the Honda XRE 190 which on a sidenote is fitted with a 220mm disc rear brake without ABS, there is not so much of a valid excuse to neglect the need for increased safety on small-displacement motorcycles throughout South America, and even a single-channel ABS would greatly improve this aspect considering the highest load while braking is usually applied to the front brake. Trying to retain a "premium" aura surrounding the ABS brakes restricting it to something that could be seen as more aspirational for the average small-displacement motorcycle buyer in South America is pointless when there is technical and financial viability to increase its availability. 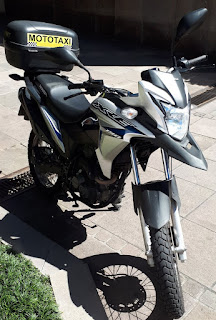 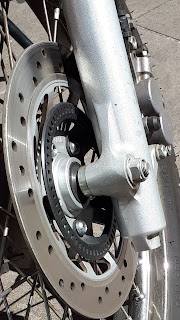 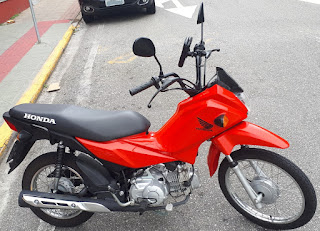 It's also worth to take a look at how electronic fuel injection went mainstream in Brazil, to the point that even the most stripped-down Brazilian Honda which is the Pop 110i features it despite keeping the kick-starter and resorting to a low-fuel warning light as a replacement for the 3-stage fuel tap of its carburettor-fed predecessor instead of switching to a more accurate fuel level indicator. EFI used to be seen as rocket-science, and in some parts of Argentina even nowadays it's not unusual to replace it with a carburettor in case of failure, but it has surpassed initial concerns regarding the maintenance cost and reliability through the time and doesn't require an excessive detuning to an engine which has an inherently low output in order to keep the compliance to the stricter emission standards enforced. Even though an introduction of ABS brakes to entry-level motorcycles could be seen as frightening due to the greater complexity and initial costs, it's impossible to neglect the example of how EFI has once proven its suitability to replace a simpler and cheaper carburettor to the point of not displacing other low-budget approaches such as the kick-start and low-fuel warning light while other resources could seem to be an obvious addition. 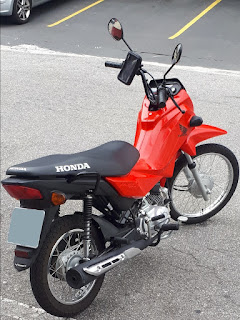