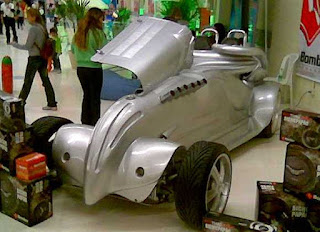 The Volkswagen Beetle's platform seems to provide an unmatched versatility that led to its popularity for beach-buggies, sportscar replicas, and so many other projects. This one, specifically, was displayed at a supermarket in my hometown some years ago, while being used to advertise loudspeakers and other sound system components. 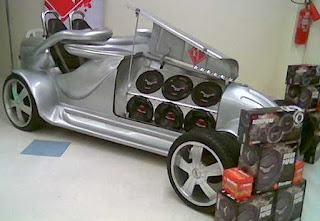 The body was made out of fiberglass-reinforced plastic, which allowed the quite complex shape, and resembled the proportions of the classic British roadsters with a long front and a set-back cockpit right above the rear axle. It was not roadworthy, but still definitely attracted a lot of attention and that's what really matters for a marketing tool anyway... 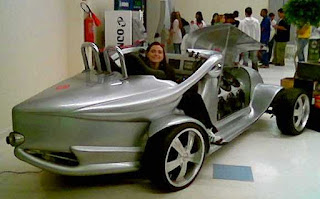 Postado por cRiPpLe_rOoStEr a.k.a. Kamikaze às 1:20 AM No comments: 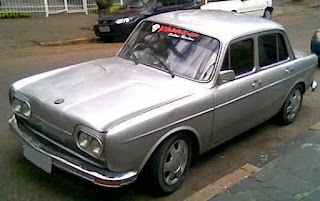 With a short production run from '68 to '70, the Volkswagen 1600 4 portas (4-door in Portuguese) was meant as an option for those who praised the simple mechanics of the traditional Volkswagen Beetle but required the practicality of a 4-door bodystyle, such as taxi drivers. However, the square design led to the nickname "Zé do Caixão" (Coffin Joe), in a reference to the filmmaker José Mojica Marins. Another nickname for the model was "saboneteira", soap-dish in Portuguese. The door handles were pointed to resemble the handles used to carry a coffin too. This one in the pictures is a '69 and had been subjected to some alterations, most notably the '99-'02 Ford Fiesta wheelcovers and the Chevrolet Opala "donkey ass" taillights. 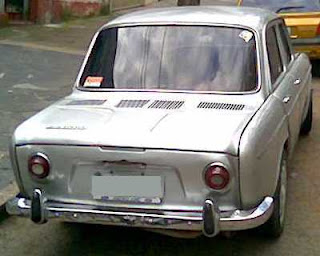 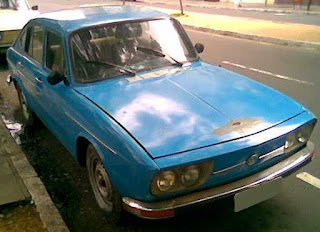 More successful was the Volkswagen 1600 TL, with a production run from '70 to '76 and also available in a 2-door bodystyle, more favored by the Brazilian market than the 4-door at the time. TL standed for "Touring Luxe", but it was often nicknamed "Tereza Louca" (Mad Thereza). The low-profile engine cooling fan allowed it to have two luggage compartments, one in the front and the other above the engine bay. 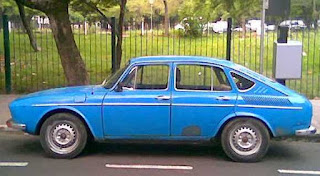 In spite of the limited availability in the Brazilian market, where the 4-door TL catered mostly to taxi drivers, police forces and a few government offices, it was a valuable asset for Volkswagen in regional export markets in other South American countries. This derelict TL is a '74 model. Introduction of the Passat to the Brazilian market in that very same year led to some fierce competition for the TL. 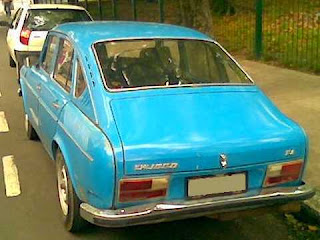 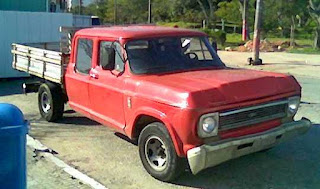 Brazilian versions of the Chevy full-size trucks had some very specific features. Automatic transmissions and V8 engines were never offered on them, relying on the Stovebolt Six as the base engine for most of their production run, except for a brief period between the '70s and '80s when the 4-cylinder 153cu.in. and subsequently the 151cu.in. Iron Duke were offered as a desperate attempt to save fuel after the oil crisis. For those who prefered a Diesel engine, the Perkins 4-236 was carried over from the 1st generation to the 2nd generation (which is related to the American 3rd generation), and remained the only engine option for the D-10, D-20 and D-40 (as the Diesel equivalents to the C-10, C-20 and C-40 were officially named in Brazil) until getting replaced by a Maxion engine in early '90s. The D-10 in the picture above is from the 1st generation, which had a more conservative design compared to its American counterpart. The crew-cab was an aftermarket conversion and retained the 2-door layout, despite the lack of practicality brought with this choice.
Postado por cRiPpLe_rOoStEr a.k.a. Kamikaze às 8:10 AM 1 comment:

SR Ibiza, a Brazilian equivalent to the Ford E-Series 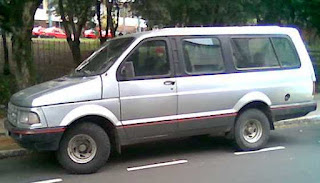 From mid-50's to early-90's, the van market in Brazil was dominated by Volkswagen to a point that competition was virtually wiped out during that period. However, independent coachbuilders offered vans based in truck platforms from Ford and Chevrolet with fiberglass bodies. Among the models based in the Ford F-Series, the SR Ibiza was highlighted by its design. Unlike other models that looked more like a copy of the American Ford E-Series, the Ibiza looked less boxy with a slightly more rounded and elongated nose. The tailgate is a hatch-type, instead of the barn-door prevalent in American vans, following a trend prevalent in European and Asian passenger vans at that time. Engine and transmission options were much restricted to what was available for the Ford F-1000, a Brazilian equivalent to the pre-'98 F-250, basically a 6-cylinder gasser and a locally-sourced MWM 4-cylinder Diesel either naturally-aspirated or turbocharged, and only manual transmissions. 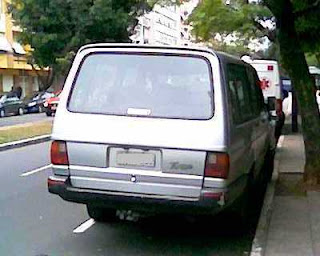 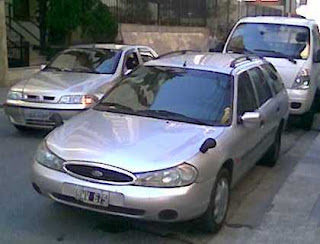 Though they're an usual feature in older Japanese cars, and still popular in certain commercial vehicles in Japan, it's not usual to find Western cars not meant to be exported to Japan fitted with fender-mounted mirrors, like this Ford Mondeo Mk.2 station-wagon with Argentinian plates. However, as it retained the door-mounted mirrors, the fender-mounted ones can be optimized to eliminate blind spots resorting to convex lenses.
Postado por cRiPpLe_rOoStEr a.k.a. Kamikaze às 1:15 PM 1 comment: 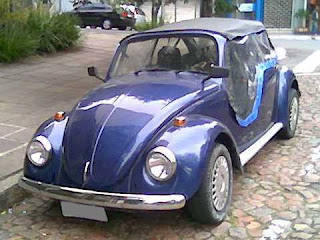 I often see this '67 Beetle in my hometown, with its controversial bodywork. Originally a regular fixed-roof Beetle, as all the Brazilian-made ones (the locally-made convertibles were aftermarket jobs), it also had the doors welded and cut a little above the floor pan, with all the enclosure provided by means of plastic roll-up windows and the canvas roof. Sure it's not as good-looking as an authentic Käfer Karmann or a Hebmüller... 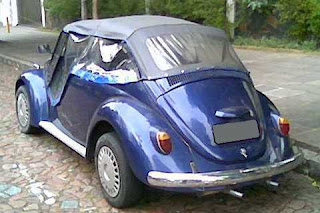