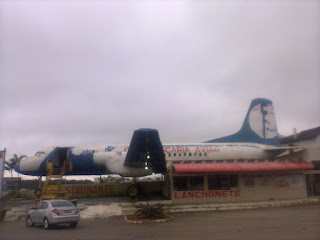 This was a NAMC YS-11 turboprop aircraft, roughly a Japanese copy of the Avro Hawker-Siddeley 748, formerly registered as PP-CTI and operated by Cruzeiro do Sul (Southern Cross), a former Brazilian regional airline that eventually merged with VARIG. It crash-landed due to poor visibility at the Navegantes airport on April 29, 1977. Navegantes is a city in the north shore of Santa Catarina state, on the way from Florianópolis to Curitiba. 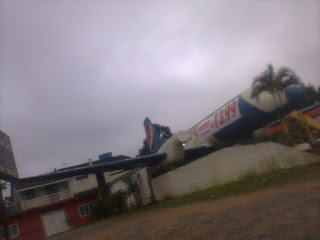 Its landing gears were ripped out when it crashed, and therefore the aircraft was written off. Some of its parts were scavenged to be used as replacements for another of the same type that was also flown by Cruzeiro do Sul at that time, while the airframe was sold for scrap after some years abandoned in the airfield where the crash-landing occurred. Its right wing is reported to have been swapped into the PP-CTE, with the damaged wing being then attached to the PP-CTI when it became used as a pizza restaurant in Florianópolis from '86 to '93. Then, it was moved from Florianópolis to São José, and subsequently removed to its current location in Tijucas after a strong windblow almost lifted it in '95. 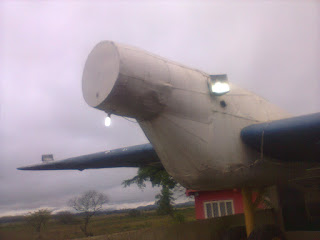 After some years still operating as a pizzaria, it became a churrascaria (Brazilian steakhouse). Nowadays, a snackbar was built right below it, with the old airframe becoming basically an ornament. 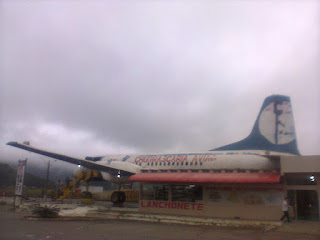 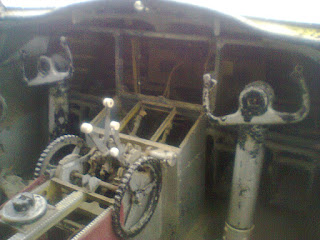 Most of its interior was removed, with the joysticks, rudder pedals and some levers (presumably engine throttle and propeller variable-pitch levers) to remember its days of glory. 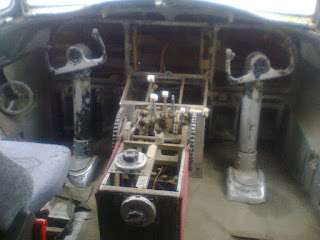 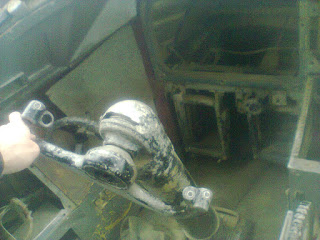 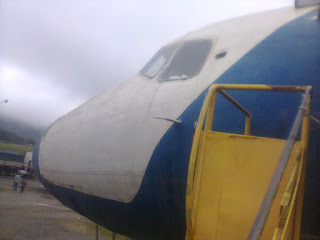 Aside from Cruzeiro, other airline that operated this type in Brazil was VASP. Trying to look cool for the Japanese-Brazilian racial minority, VASP nicknamed it "Samurai". However, due to the crash records of the type in the country, it was also often called Kamikaze. 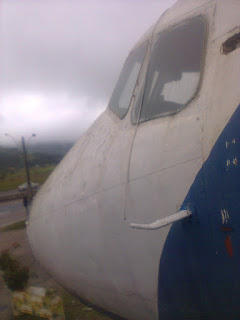