Is GM ready to play the downsizing game?

Even facing some resistence from the (stereo)typical GM's most loyal customers, the downsizing is a reality that can't be denied. However, even famous for its bigger engines, as a global car manufacturing group, General Motors is ready to face competition in the newer trend in engine development. 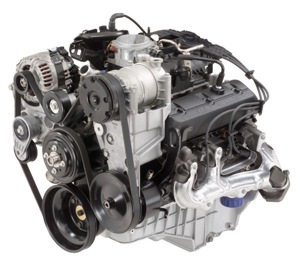 A clear example is the 4.3L Vortec V-6 engine still offered in basic versions of the Silverado. Some versions of the 2.0L straight-4 Ecotec fitted with turbo and intercooler can deliver the same 260lb.ft. torque rating in a lower engine speed, as well as more than its current 195hp rating. Then, not just due to the smaller weight and displacement of the engine, also since a lower speed is required to do the same jobs it turns the 4cyl turbocharged more efficient. 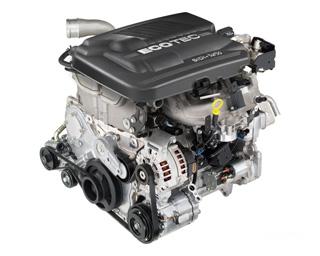 Some american customers can still see the downsizing as an european trend, and possibly hard to overcome EPA regulations, but the use of improved smaller engines has been a way to cut greenhouse gas emissions, among other pollutants. The combustion proccess is more efficient due to the higher air flow, then less carbon monoxide is generated, for example. And an old phenomenon widely reported in early turbo setups, the turbo-lag, had its effects reduced with newer engine management systems. GM has been dominating the technology of turbochargers, and ready to face some opponents well-known for their advanced technology, such as BMW. Recently, BMW released a 2.0L twin-turbo straight-4 engine, developing 245hp and 260lb.ft, to replace its 3.0L straight-6 (258hp/230lb.ft.) in some models such as the X1. Considering the manufacturing cost, GM still has an advantage since their engine uses only one turbocharger. Even with the benefits of the smaller engine, a traditional customer would not want to pay too much more for it. 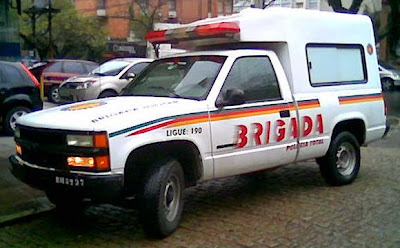 Some people possibly would never wonder something more than 50% smaller in displacement performing the same job of a 4.3L V6, often considered even "too small". For example, it's too hard to see a Chevy ambulance with a 6-cyl engine, or a police vehicle, traditionally powered by large V8's , often even restricted to the so-called "police packages".

Drawing above is only for artistic purposes, Chevrolet Astro was never used by any police department in Brazil
However, a smaller engine is not necessarily a worse engine. Recently, General Motors of Brazil limited the offer of the Blazer to a 2.4L flexfuel 141/148hp engine, but until 6 years ago there was the option for the iconic 4.3L V6 that was imported from the United States, that still have some cult status in police departments due to its performance, and some older versions fitted with this engine remain on duty, including some very specific police departments such as Tobias de Aguiar batallion, better known as ROTA and famous for its former all-Chevy fleet. What is hard to understand is why an option for this very specific application was never offered, while the 2.0L turbocharged engine is still made in GM's São José dos Campos engine plant for export markets. Could be a bolt-in replacement...

In other markets, most notably european countries, GM has been successful with the downsizing. Some of its models are currently offered only with turbocharged engines in Portugal, such as the Opel Insignia, currently offered in the american market as Buick Regal, featuring a 2.4L Ecotec non-turbo (182hp/172lb.ft.) not avaliable in its european counterpart and the turbocharged 2.0L in a 220hp/258lb.ft. version (this setup would already be enought to replace the 193hp/250lb.ft. 4.3L V6 in the Blazer). Surprisingly, in a segment where 4-cyl engines are perceived as "less luxury", GM is not offering the 2.8L turbocharged V6, that with its 325hp/320lb.ft. could beat the 3.6L currently used from the Chevy Camaro to the Cadillac SRX (without any V8 option in the current generation) delivering 300hp/273lb.ft., again, at higher engine speeds. Even the Vortec 4800 V8 with its 295hp/305lb.ft. could be replaced by the 2.8L without any prejudice in the performance. All of that with systems already avaliable in GM's portfolio.

So, seems like GM is ready to play the downsizing game. What about you?