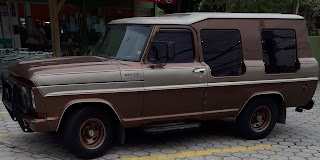 It may seem odd at a first glance, but the full-size Ford trucks range in Brazil didn't follow the same evolution path of its American/Canadian/Mexican and Argentinian counterparts, with local variants of the 5th generation being introduced only in '72 when it was already being phased out anywhere else, with a subtle facelift which led to the introduction of a plastic grille and 4 square headlamps, and soldiering on until '92 when a switch to the 8th generation was on course. Unique to the local market was the F-1000 which was basically an equivalent to the F-250 with the short-bed bodystyle of the F-100 and a regionally-sourced 3.9L MWM D-229-4 Diesel engine later also available with turbo, or the Thriftpower Six imported from Argentina in a dedicated-ethanol version specific for the Brazilian F-1000 or in a regular gasoline-powered version only in '90.

It used to be quite common to see many aftermarket conversions for full-size trucks in Brazil, which were also somewhat of an attempt to fill the gaps left by the restrictions against car imports between '76 and '90. Among those, there were some bodyworks halfway between an SUV and a full-size van, often leading to such vehicles being mistaken for a Mexican Ford B-100 or similar conversions which also used to be performed in Argentina where they're often referred to as "F-100 carrozada" or "F-100 rural". What might surprise Americans and Canadians the most is the resemblance to the panel vans based on older generations of the F-Series, but the absence of the Econoline vans in other markets by then has led to such conversions having their popularity, even though in Brazil they were more often seen as a recreational vehicle than as a workhorse. 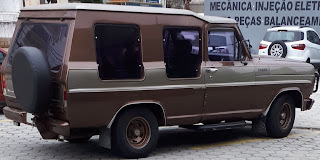