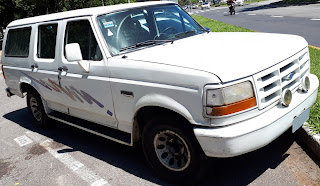 Pick-up trucks with some sort of SUV-type conversion used to be quite popular in Brazil at least until the late-'90s, with examples from that time still roaming around once in a while. Used not only by the public institutions for the most diverse roles such as ambulances and police vehicles, they also had its share of the market among the general public. It may seem at a first glance similar to the Ford Bronco Centurion Classic, a 4-door conversion which was done in the United States based on both the F-150 and F-350 to fill the gap left on the Ford domestic range by the absence of a long-wheelbase 4-door variant for the Bronco, even though this Brazilian Ford F-1000 has the short wheelbase of the F-150 regular-cab short-bed with a payload and GVWR closer to what a F-250 would be slotted into. With a wheel arch reaching the rear door on the right, it's easier to figure out it has a shorter wheelbase than its American counterparts which were based on a factory double-cab configuration which hasn't been officially available in Brazil during the production cycle of this generation of full-size Ford trucks. 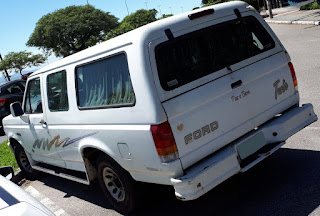 Besides the unusual 3-door layout more associated with vans, another aspect to highlight is the much smaller engine fitted to this vehicle, a Maxion 2.5HS 4-cylinder turbodiesel made in Argentina. Only a 5-speed manual transmission and rear-wheel drive were available with this engine, while the larger 4.3L MWM 4.10 turbodiesel which also had a 4-cylinder layout had the 4-wheel drive as a standard feature for a while until it became the sole turbodiesel option for the last batch of the F-1000 in '98 when the smaller yet higher-revving Maxion quit being offered in the F-1000. The same model also used to be available in Argentina where it retained the F-100 badging as a matter of tradition, and similar bodyworks locally referred to as "F-100 carrozada" or "F-100 rural" were also available and usually made by Igarreta which owns a Ford dealership in Buenos Aires. To be honest, the 3-door layout of this F-1000 nearly led me to mistake it for an Argentinian F-100 carrozada rural conversion, since the older ones which I used to see more often in Brazil as private vehicles retained a 2-door configuration and some of this generation which were used as police vehicles had a 4-door layout. 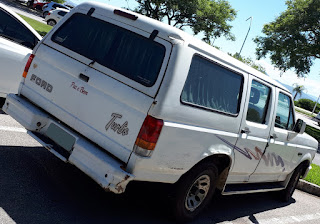