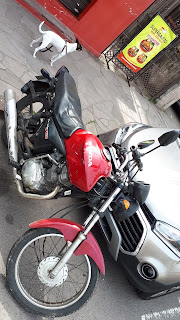 At a first glance, this Honda CG 150 Job may look like any other which still roams around Brazil, but it had been fitted with a rather unusual feature. It has been fitted with a car-type receiver hitch to tow a small trailer, requiring a supporting structure to be added to its chassis. I have been used to see similar setups for a while during my childhood, but haven't seen so many of those for the last 16 years due to the increasing popularity of cargo sidecars and the lack of a regulation for towing with motorcycles until some years ago. Nowadays the most usual receiver hitch setup for motorcycles is bolted to the rear suspension swing-arm. Spotted this one yesterday in my hometown Porto Alegre.