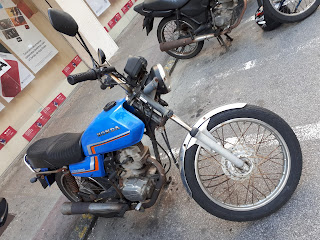 Leading the small-displacement utilitarian motorcycle category in Brazil since its introduction in '76, no surprise it's still quite easy to spot some older models of the Honda CG on the wild, mostly because the OHV engine used until 2009 with its gear-driven valvetrain is long-lasting and easy to service. This one is from the 2nd generation, which had the 4-speed transmission of the previous replaced by the 5-speed which had been previously used in a short-lived dedicated-ethanol version. Even though once in a while it's quite common to spot a 2nd-generation with the color-matching plastic front mudguard and a square headlight, this one still featured the original rounded headlight and chromed mudguard, and only a few parts such as the turn indicators and the hand grips are totally mismatching the '83 model-year while the smoked tail light lens matches the size and format of the original red one. 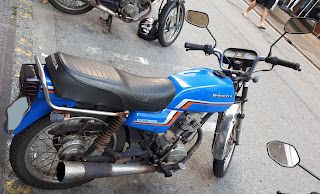 Even though it's clearly not babied, with some amount of rust clearly visible to an extention that would make it fail a roadworthiness inspection had such matter been effectively taken seriously in Brazil, the period-accurate graphics in such an utilitarian motorcycle that may eventually been subjected to harsher operating conditions is noteworthy. Seemingly quite easy to restore to a fully period-correct appearance, this '83 Honda CG 125 has its nostalgia appeal in a moment when there is a growing appreciation for its historical value, yet remaining somewhat practical instead for daily riding instead of being turned into a trailer queen to be only displayed at antique car and motorcycle events. And truth be told, its austere appearance remains quite pleasurable to see. 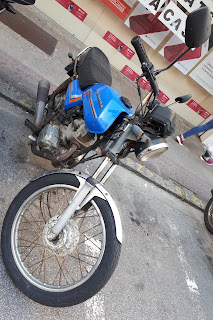