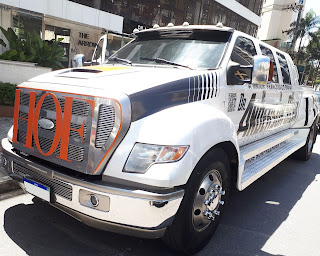 Brazil is on many aspects not so easy to explain to first-timers, and it includes the local car scene. Many factors such as fuel costs, initial purchase price and concerns about maintenance result on vehicles often similar on the outside to actually have much more substantial differences to their overseas counterparts, including this locally-built replica of a Ford F-650 "SuperTruck". Relying on a much more austere 4-cyl Cummins ISB3.9 turbodiesel engine and a 5-speed manual transmission as fitted to a Class-5 version of the Ford Cargo, unlike the original American model which resorted to a 6-cyl Cummins ISB5.9 and had an automatic transmission, the leisure-oriented purpose ends up being pretty much the same. Noticeably larger than mostly any other private vehicle registered in Brazil, with a commercial driver license being required to drive this beast on public roads, it's a great mobile billboard for businesses, and a powertrain from a strictly commercial truck which used to be among the best-sellers of its class became suitable to this replica, also leading to a better availability of replacement parts locally.
As the Brazilian equivalent of the F-650 was phased out in 2005, according to a former Ford engineer because transitioning from a mechanically-governed engine to an electronically-controlled one could be deemed too costly by customers with a more conservative profile, the Cargo range took over the role as Ford's only medium-duty truck for South American markets until the company retreated totally from the truck market in the region due to the closure of the Taboão factory in São Bernardo do Campo in 2019. The coachbuilding was done by Tropical Cabines, a company specialized in crew-cab conversions for trucks when it was not a much common factory option even for the light-duty ones in Brazil, going out of business after Ford phased out local truck manufacturing. This one is a 2010 model-year, and in the meantime a few others were made, some resorting to a Class-7 Ford Cargo chassis and even featuring a 10-speed single-clutch automated-manual transmission. 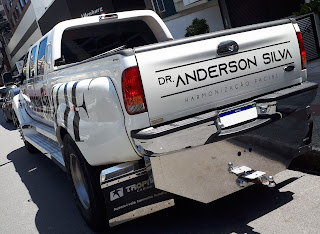