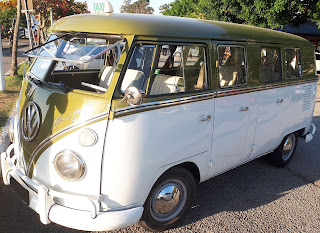 Not sure if this one specifically had actually been a taxi in my hometown Porto Alegre, but there were some before the "lotação" (jitney) share-taxi system switched to larger coachbuilt minibuses. Its current owner told me he inherited the Kombi from his deceased grandfather who has bought it brand-new. The left-hand passenger doors mirroring their right-hand counterparts seem to have rendered it easier for the Brazilian branch of Volkswagen to develop its export-only RHD models with mirror-image left-hand rear doors (unlike its German counterparts which simply had the right-hand rear doors assembled with an inverted opening pattern) meant for CKD assembly in South Africa (where the Brazilian Kombi and its cargo derivatives received locally-made 1600 engines in contrast to the 1500 which was fitted to the Brazilian-assembled units by then) and Indonesia, yet no RHD export market got the 6-door bodystyle on a regular basis. This one is a '72 with the Luxo trim, noticeable by the two-tone paintjob. 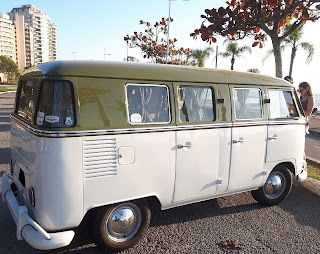